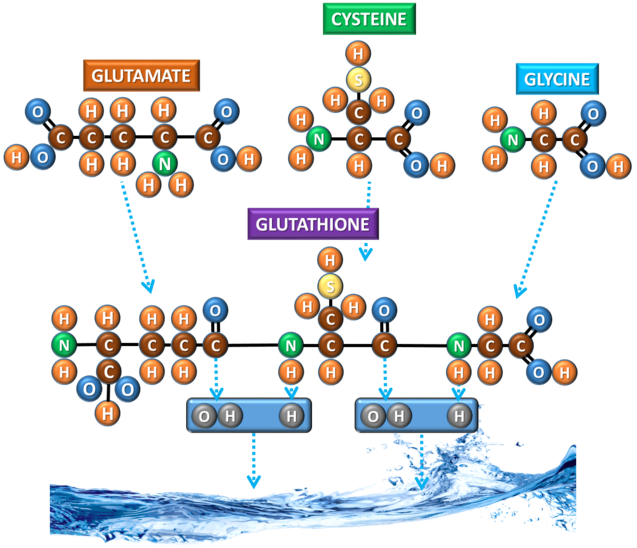 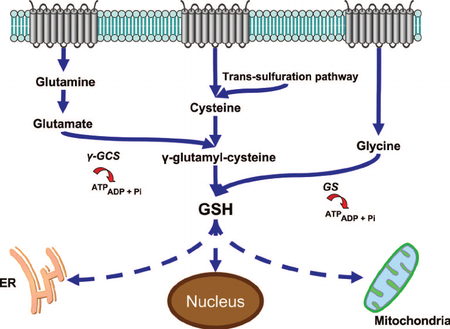 Glutathione is not an essential nutrient for humans, since it can be synthesized in the body from the amino acids L-cysteine, L-glutamic acid, and glycine; it does not have to be present as a supplement in the diet. Still, GSH synthesis in the liver has been shown to be essential. The body makes its own glutathione and does not absorb ingested supplements. Lyposomal glutathione may be taken, but has side effects to be kept in mind.

GSH helps the liver detoxify fat before bile is emitted, which takes stress off of the gall bladder. It is a helper molecule for important enzymes and is involved in critical biogenesis of 1/3 of all human proteins. It reduces peroxides, participates in leukotriene production, it helps detox toxins produced as by-products of metabolism, and cancer programmed cell death. GSH plays a crucial role in immune function, promotes T-cell function, prevents drug resistance, protects from environmental toxins, and fights cancer. In fact, elevated GSH levels in tumor cells are able to protect such cells in bone marrow, breast, colon, larynx, and lung cancers. Adversely, GSH deficiency causes cells to be more vulnerable to oxidative stress which contributes to cancer development. A growing number of researchers are crediting the increase in neurological disease and cancer to glutathione deficiency.

Experts now recognize that an alarming rate of people are GSH deficient because of:

​How to boost GSH production:

To boost GSH production, the following processes are recommended:

Glutathione deficiency is found in nearly all very ill patients. These include people with chronic fatigue syndrome, heart disease, cancer, chronic infections, autoimmune disease, diabetes, autism, Alzheimer's disease, Parkinson's disease, arthritis, asthma, kidney problems, liver disease and more. Normally glutathione is recycled in the body - except when the toxic load becomes too great. And that explains why we are in such trouble. That is why most people survived with the basic version of the genetic detoxification software encoded in our DNA, which is mediocre at ridding the body of toxins. At the time humans evolved we just didn't need more. Who knew we would be poisoning ourselves and eating a processed, nutrient-depleted diet thousands of years later? These people are missing GSTM1 function - one of the most important genes needed in the process of creating and recycling glutathione in the body.

The GSS gene provides instructions for making an enzyme called glutathione synthetase. Glutathione synthetase participates in a process called the gamma-glutamyl cycle. The gamma-glutamyl cycle is a sequence of chemical reactions that takes place in most of the body's cells. These reactions are necessary for the production of glutathione, a small molecule made of three protein building blocks (amino acids). Glutathione protects cells from damage caused by unstable oxygen-containing molecules, which are byproducts of energy production. Glutathione is called an antioxidant because of its role in protecting cells from the damaging effects of these unstable molecules. Glutathione also helps process medications and cancer-causing compounds (carcinogens), and helps build DNA, proteins, and other important cellular components.

CTH gene: This gene encodes a cytoplasmic enzyme in the trans-sulfuration pathway that converts cystathione derived from methionine into cysteine. Glutathione synthesis in the liver is dependent upon the availability of cysteine.

* use in moderation and seek health monitor advise. Overdosing can be dangerous to your health 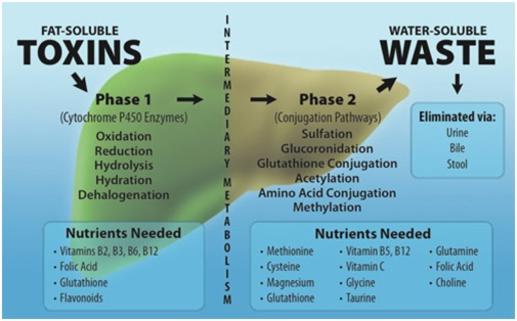 Glutathione (GSH) is an important antioxidant in plants, animals, fungi, and some bacteria and archaea. Glutathione is capable of preventing damage to important cellular components caused by reactive oxygen species such as free radicals, peroxides, lipid peroxides, and heavy metals. 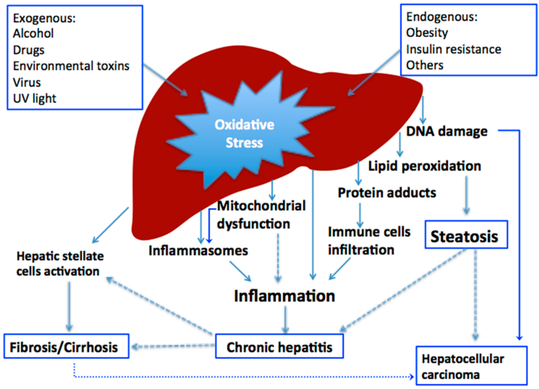