TO MEAT OR NOT TO MEAT

If you are on your way to a restaurant or store with intent to ingest juicy flavorful meats, then the following warning might interest you:

What is: Neu5Gc? According to a UC Davis Health article dated October 19, 2016, Neu5Gc is a non-human sialic acid sugar molecule common in red meat that increases the risk of tumor formation in humans. It is also prevalent in pig organs, with concentrations increasing as the organs are cooked.

Neu5Gc is naturally found on cell surfaces in most mammals, but not in humans. It gets incorporated into human cells by eating meats, organs, and some dairy products. Previous studies indicate that the immune system recognizes Neu5Gc as a foreign threat and produces antibodies to counter it when incorporated into human tissues. Repeated consumption of meats causes chronic inflammation, which has been known to increase risks of tumor formation. Neu5Gc has been linked to cancer as well as cardiovascular and other inflammatory diseases, including some bacterial infections. In addition, the creation of anti-5eu5Gc antibodies can also function as tumor makers.

Recently, high levels of the free form of another sialic acid, KDN, have been reported in breast, cervical, liver, lung, throat, ovarian and uterine cancers. Also, a polymeric form of Neu5Ac, a polysialic acid, is a metastatic factor when expressed on the cell surfaces of a number of human cancers.

The US National Library of Medicine (Feb 19, 2014) indicates that non-human sialic acids are involved in human cancers. It was concluded that Neu5Gc is entering human tissues exogenously via oral ingestion. Dietary sources that are rich in Neu5Gc include:

The cancer type most prominently associated with red meat consumption is colorectal cancer (CRC), one of the leading causes of cancer-related deaths in the United States. High intake greater than 160g/day increases risk 1.35-fold. This association is stronger for processed meat. Esophageal, gastric, prostate, and endometrial cancer risk is also significantly elevated by high meat consumption. 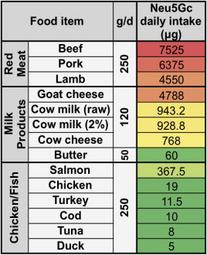