The second objective is propulsion. This is achieved by emitting pulsed cathode rays out of one end of the craft tuned to the rate of change of jet stream particles surrounding the bubble. At the other end of the craft, cations are emitted at the same rate of change. This creates a push/pull effect, doubling the ship’s acceleration and velocity capabilities.

A space craft is merely an artificial planet composed of a negative oscillating electric field, a magnetic field, and Van Allen belts just as does the Earth. The interaction of solar and cosmic energy with the Earth’s field gives rise to a base rate of change, or frequency, estimated to operate at 35 MHz. But this rate changes in free space based on radiation interaction with the medium just as it does with the Earth. Thus, space has to be “sniffed” on a regular basis in order to determine active frequency bands in order to draw upon them. The power of repulsion or propulsion will therefore be proportional to the phased frequency or harmonic applied against the medium’s activity itself.

ON THE NATURE OF SPACE TRAVEL

In Legacy’s first episode, toward the end of chapter 2, a detailed technical description is provided of how atmospheric anti-gravity crafts operate:

"A six megavolt, high amperage electrode pole pierced the ship from top to bottom, powered by a static generator. At the bottom of the craft, a cylindrical 100 Tesla electromagnet enclosed the bottom part of the electrode, also powered by static electricity.

Two centrifuge flywheels—filled with liquid mercury and lined with thorium—spun at 25,000 rpms around the electromagnet in opposite directions—a wheel within a wheel. These wheels induced rotating EM toroid fields and tachyons that ionized matter, mechanically countered gravity, and served as a gyroscope. The inner toroid produced artificial cabin gravity, the outer nullified Earth’s gravity, and served as shields. In other words, the heart of this machine was a powerful, synthetic Lorentz vortex produced by a static pole, an electromagnet, and spinning centrifuges.

Pulsed cathode rays, contained by the Lorentz vortex outside the ship, created brief vacuum portals for the craft to move into. Speed and travel vectors were regulated by vortex strength and electromagnetic element phase. Levity was sustained by electrons emerging from the bottom of the electrode, looping magnetically back to the top. This action created a high-pressure vortex beneath the ship and a low-pressure vacuum above it, generating a type of airfoil lift. Operational field frequencies, phase offsets between electric and magnetic elements, and power levels, I must confide to secrecy."

As a final added note, it would be possible for such space craft to “recharge” by tuning into energy bands much as crystal radio or RF demodulation sets would, whether it be a planet or star. Thus, the craft would never run out of power.

Establishing sympathetic vibrations between objects yield relevant attraction or repulsion response much as a quantum state which determines mass and velocity. This can be termed: phasing.

The appearance of positive polarity in space is due in part to a vast web of terminating colliding fields present in negative materials (electrons, dust, gas, and radiation). In turn, all negative materials are in themselves unipolar points of charge whose internal layers alternate from positive to negative and must end in a positive collective infinitesimal center. Therefore, positive space charge flows into negative surfaces that in turn support an infinite number of positive/negative layers beneath them. These space fields flow and interweave to form a sort of invisible electric pulsing “jet stream,” constantly changing in intensity and direction much as winds do on Earth.

As worlds, moons, and stars gyrate, these jet streams (best termed energy streams) also swirl and bend to the will of adjacent moving masses, magnetic fields, and solar/planetary radiation, giving rise to what can be termed as “travel lanes.” These lanes, under constant bombardment from solar and cosmic radiation, tend to oscillate at specific frequencies and proportional intensity, thus creating magnetic “momentums” or “peak energy harmonics” about energetic particles and waveforms in the stream. Thus, the stream never rests, though maintains a positive charge. The same can be said of space between atoms, acting in much the same manner. The positive feeds into the negative or into matter, and positives themselves draw apart. It is in that loose positive field that travel lanes exist. 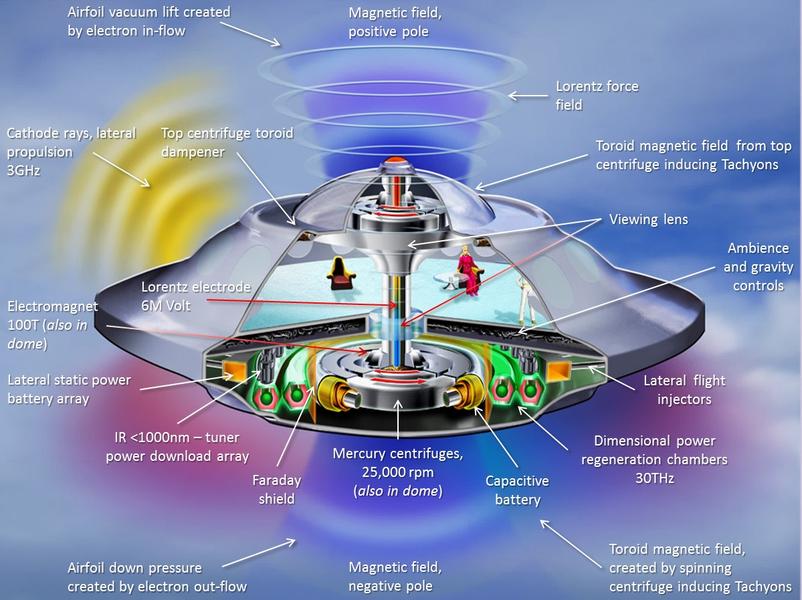 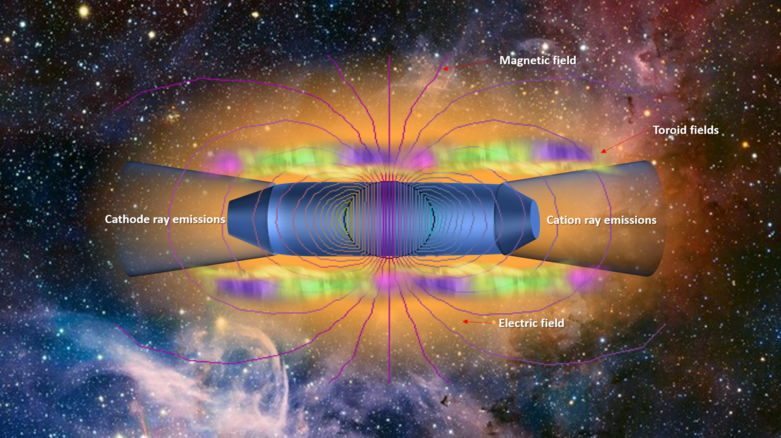 These craft, however, are not designed to travel in outer space for various reasons. For one, the concept of achieving levity by creating a vacuum above the craft is rather pointless in space. Additionally, essential structural and field protection elements must be taken into serious consideration to protect crews from deadly high-energy cosmic rays and particles. There is also field symmetry or boundary equilibrium, a critical component that ensures adequate draw on cosmic forces and avoids flight instability or tremors that could shake the craft apart.

Space faring craft borrow many functional features from atmospheric ships, building upon them to be compliant with stringent space requirements. To travel in space and use its currents, we must first consider that space itself is positive to matter and the relationship between objects is driven by two primary forces: 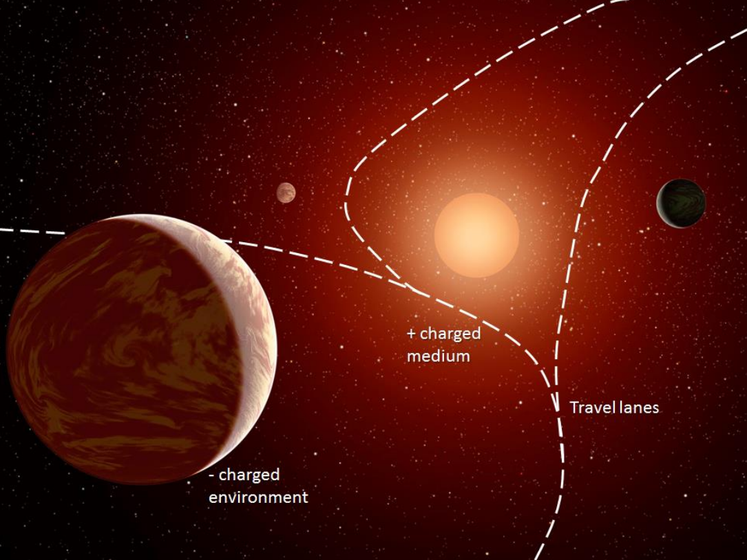 A space traveler’s first objective is to counter cosmic radiation and dimensional time factors (not to be confused with time dilation but rather dimensional transitions that effect local time and space). The craft must ensure that roaming negative particles repel away from and does not impact the ship. To achieve this, the craft must extend an oscillating electric field that forms an event barrier some distance away— a radiation tunnel or bubble of sort—to counter jet stream forces, external radiation sources, and dimensional effects. The electric bubble’s frequency must coincide with the magnetic momentum frequency of the medium about the ship. This barrier is reinforced by a central magnetic field that acts as a containment wall that also helps trap external radiation battering the barrier, thus adding another layer of natural protection from harmful space elements. In addition, a toroid magnetic field (tubular field) is placed about the craft to act as a synthetic Van Allen type belt. This belt is generated by static induced into spinning centrifuges filled with liquid mercury.