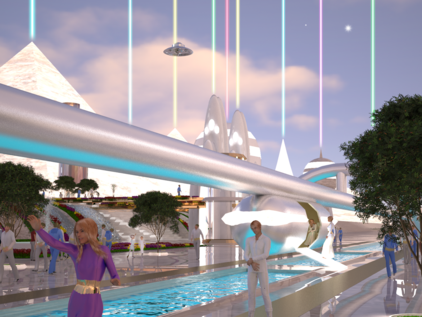 I stood on a wide metal platform overlooking an underground city below. Behind me were hallways and airlocks separating the city from the planet's surface high above. A vast matrix of trams crisscrossed the modern city beneath me whose building lines, built upon stepped platforms, were often interrupted by nature parks, lakes, and beaches. Many individuals enjoyed time off in boating activities while others relaxed amid nature. Above me was a canopy that looked like fiberglass yet it was more like an enormous LCD screen covering the city upon which the sky was realistically represented.

A man dressed in an ornate red outfit of somewhat Asian aspect approached and introduced himself as Nur El. He was followed by several assistants and spoke mentally to me. Time was of the essence and I was invited to tour the city. We got into a tram whose top section went transparent and I could see the city below, appearing like a vast set of concentric rings with a large metallic building complex in the middle. 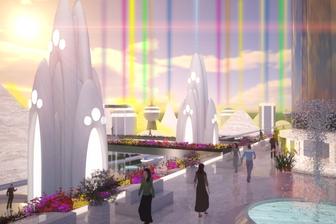 In their language, they performed a happy sing-song by bopping up and down in groups of four at a time by bending at the knee. I took the bopping action to represent flowers that, upon bop ups, rose from the land and bloomed during the day, but on bop downs slept during the night.

The message was that true daylight and blooming occurs during our days in the inner, when we are most glorious and radiant under the Infinite sun, but sleep our glowing expressions on this plane. Thus, the concept of reincarnation and spiritual attunement -- flowers and life in the inner, sleep in the physical. Their song ended with all their faces looking upward forever, flowers pointing to the sun eternally never to sleep again.

There was no applause or emotion shown, only common understanding and gratefulness to have shared this brief yet refreshing lesson on the progressive science of life and the accountability we all share with one another "as groups" in understanding the forces that establish this physical state of consciousness and whence they come from -- the Infinite sun toward which we should constantly blossom. No one can take us toward this sun against our will, the only propellant to get us to blossom is simply our awareness thereof, not imagination but understanding and love, not for the past's sake or fear thereof but the future. The more inner sun we add to this life, the faster we approach it by tuning our soul with positive inner influx therefrom because, where your mind is, thus you live.

I was then led outside the city and shown how the ceiling projection system worked through a series of energy tuned cells much like chained video systems. Behind it was the common orange colored rocks and sands of Mars.

The tram stopped in a housing complex and I saw several doorways four feet apart. However, when I looked into one of these apartments, the insides were vastly larger than the outside gave credence due to spatial manipulation. I was surprised to learn that the entire city was actually in a similar spatial plane such that size and time were not relative to Earth's and dimensional or sequential factors. i.e., if we went there, we'd pass them right by.

Next, I visited a school and was led into a classroom. Waiting for me were some two dozen or more children dressed in contrasting grayish clothing upon a stage. Unlike Earth children that don't really like to participate in school plays and concerts, these kids were not only honored to do so but were vastly more advanced spiritually than us. As they performed, the audience and parents turned to see me and smiled, helping me understand mentally what their song was about.